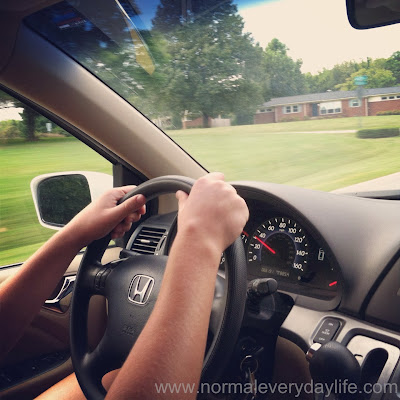 I love to read lifestyle and home blogs.  Lately though, I've noticed I often come away feeling bad about my house, my parenting, or my life choices.  So often the images presented send the message that the writer has it all together.  Even when they try to do a post to be more real, showing you a messy house or kids coming undone, it still feels staged and way better than my own "real" situation.  I like to read about normal life, the things that happen everyday.  Things that make me say, "Oh, I can relate to that!"  The posts that stick in my mind the longest and keep me coming back to read a blogger are the ones that inspire the feeling that she's just like me.  She's had those "losing it" moments where the house is a wreck, there's nothing for dinner, and the kids are talking back.  She knows what it's like to fail as a wife, a parent, a friend.  And she's gotten back up, said she's sorry, and started all over again.

Normal everyday life for me right now involves two teenagers and three elementary age kids.  I have a husband that travels two or three nights a week. There's a lot of running around, early morning and late nights, homework that never seems to end, and sports practices.  In the background, there's a ticking clock reminding me that this is the last year my senior daughter will live full-time at home. Have I done enough, been enough, instilled enough?

Normal everyday life also is full of sweet moments that I don't want to forget.  All of my kids are old enough to joke with now.  It's such a special feeling to laugh with your teenagers.  They understand and tease like almost-adults now.  I treasure the times we laugh over fashion choices (theirs and mine), teacher quirks, silly mistakes, things we don't know.  I treasure the times we talk about grown up issues and hear their own personalities and opinions come through.  We've moved past the kid movie stage and can all enjoy TV shows and movies that appeal to parents, too.  Now we often get wonderful snapshots of the friendship we will hopefully enjoy with our someday adult children.

I'm creating this blog to document my own normal everyday life, but I'd also to love hear about yours!  What's happening in your life at this stage?
Posted by normaleverydaylife on Monday, September 23, 2013 5 comments: