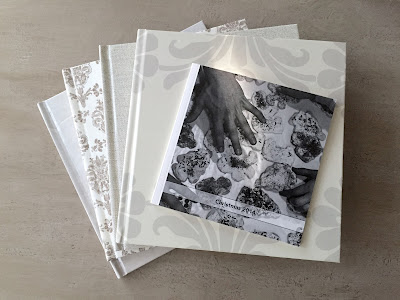 Last week, I fell into the black hole of digital photo book making. I've been working on our 2014 photo album for a couple months desperately trying to finish before the end of 2015. Then my daughter took some really pretty family pictures of everyone on our Thanksgiving trip and I thought a book of just those might be nice. That got me thinking about Christmas gifts and who else might enjoy a photo book. Once I started down that path, other ideas popped up and I had to make myself go back to our family album from last year and regroup!

What happened to the days of getting some prints and putting them in an album a few times a year? Or maybe just keeping them all in a storage bin. Something simple.

Now I take so many more pictures. Cell phones let us capture all the moments, but then I feel like I have to DO something with them. Apple assures me they're floating around in a cloud, but really...will they actually be there when I want to look at them?

So I find myself in front of the computer for hours on end, foregoing a shower and my to-do list while my eyes bleed squinting at tiny thumbnails of pictures I saved over a year ago. Now which one of those shots was a good one? Why isn't that uploading? What? Why did I take all these pictures?!?

And as always, I vow that next year I will get on this earlier than December!

How about you? Are you with me in the never ending quest to get your pictures under control? Have you ever lost waaay too much time after clicking on start your photo book now?

Posted by normaleverydaylife on Monday, December 07, 2015