Get On the Bus 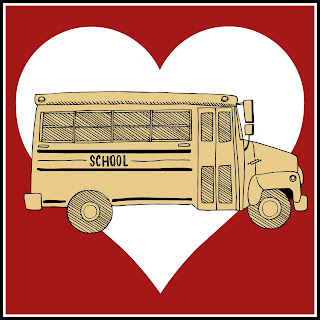 I've always been a big fan of the school bus. You get your child ready, send them out the door, and start your day. Can that system really be improved? But, like so many things in motherhood, guilt would sometimes creep up. I would read an article or talk to someone that loved driving their children to school. The great conversations, the bonding, the memories they'll treasure for a lifetime, and I'd think maybe I'm missing out on something even better than the bus. So this year I decided to drive my three middle schoolers 25 minutes to school each morning. Their bus comes very early now and I wanted to see what all these people have been raving about. Let me tell you...they lied.

If you have more than one child in the car, your morning conversations are much more likely to consist of mediating arguments than sharing secrets. You won't be in the mood for anything other than a nap after you've given 45 directions and repeated yourself 75 times all the while fighting your way across town in rush hour traffic.

Stop bothering her. Don't talk to him. Why are you bringing that up again? You forgot your shoes?!? Where is your lunchbox? Why are we always late? Leave each other alone. Why is this car in front of me moving so slowly?!?

More often than not you will arrive in the drop off lane with your blood pressure through the roof regretting EVER letting that bus pass you by.

Yesterday morning, I had not turned on the van for more than five seconds before a fight broke out between my twins. One was cold after choosing to wear only a thin t-shirt and one was dressed appropriately for the weather. When the freezing child asked her sister to turn on the heat, the one with a coat said no and promptly turned on the air conditioner. This incited way too loud protesting from the one who was cold. Which led to way too loud yelling from me about why in the world I cannot even back out of the garage before there is fighting. When confronted with why she would use the air conditioner on a frosty December morning, the one with a coat decided to double down on the ridiculousness and claimed it was fine outside and maybe a little warm in here. And thus our bonding time began with a lecture and then a punishment...everyone would ride the bus the next morning!

And I refused to feel guilty about it. Well, maybe just a little. :)

Can you relate? How many things have you set out to do as a mom that did not quite match your expectations?

Posted by normaleverydaylife on Wednesday, December 09, 2015